As with most SCA sufferers Steve remembers little about the event. But he was fortunate to be with 3 other players/friends - Judith, Paul and Stuart - whose actions undoubtedly saved his life.

Steve was searching for his ball when he collapsed. His instant collapse made his friends think he was joking initially, until he started making odd noises and turning blue. His friend Paul recognised this was more than a fit or heart attack and immediately started CPR.  Stuart rang 999. 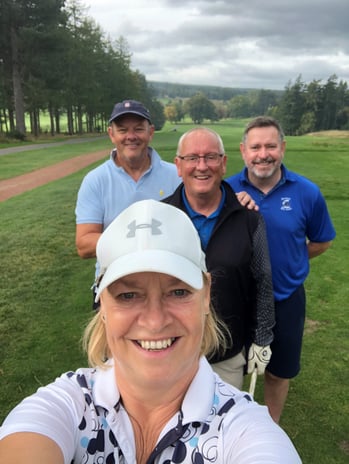 The 18th tee is about as far as you can get from the club house, where there was a defibrillator installed. A couple of young lads were following behind and could see something was wrong so ran back to the club house to raise the alert.

The club has had a defibrillator installed for several years and although it had been taken out a couple of times, emergency services had arrived prior to the need to use it. This time was different.

Gill arrived at the 14th tee with the defibrillator and had done training on the unit a few years before. Thinking that she would take it and probably not have to use it as per a previous occasion, she “…knew as soon as I arrived, we’d have to use it. He was in a bad way.”

Judith, one of his Four-ball friends recalls how they could hear the ambulance sirens “but we just knew it wasn’t going to be here soon enough.”

“It was amazing, immediately after I’d pressed the button, he came back and was conscious.”

Steve was taken to hospital by Air Ambulance where he had stents fitted and continued his recovery.

Steve has a different perspective on the event than this Four-ball partners. “I’m not a big fan of helicopters, but none of that would’ve happened if it had not been for the CPR and the quick thinking of my golf partners, so I’m extremely grateful to them. But as a survivor the perspective of what happens is very different, you’re almost like an attendee of a major traumatic event, which is felt and witnessed by everyone else but not you.

“It does bring the importance of having knowledge of CPR and I think everyone should be able to do that as a matter of course. Having a defibrillator here at the club is critical. The course is a big piece of real estate, so having a second one here round about the half way point would be great to at least reduce that risk.”

Steve has donated a new defibrillator to the club through the Forward Hearts program run by Stryker, the manufacturer of the device that saved his life.

defibshop are committed to equipping everyone with the skills and knowledge to save a life. Speak to one of our Product Specialists on 0161 776 7422 or fill out our Contact Form.